When we had watched precisely one episode of the American remake of House of Cards, I was already somewhat frowny over various deviations from the UK original, especially in the area of Mrs U. This prompted me to have a serious think about what it is that makes me love her so much in her original form. 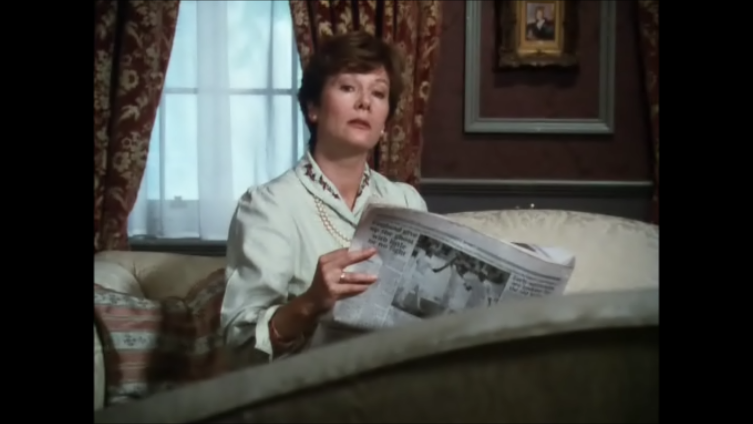 Mrs Urquhart – our scheming protagonist’s better half – gets very little on-screen time in the original House of Cards. Then again, the original miniseries is only four hours long, so there’s very little time to play with. She puts a stamp on the whole shape of things much bigger than her physical presence within it, however, that makes her a vitally important character (and even more so in the sequels).

The story itself is about Francis Urquhart, and his descent into darkness to receive “justice” for what should have been his at the outset of the story. It’s a tale of scheming and compulsion and violence and adultery. Mrs Urquhart is not involved; she steps aside, she goes to the country, she smiles and pats Francis on the cheek and goes upstairs. But heavy in all his actions is her imprimatur upon this path. She approves. And that permits him. (Even the adultery. Especially the adultery. It is a strong if subtle implication that Elizabeth nudges him to “making sure” of his new media pet. And in the second series, she explicitly sets him up with a new toy. I contrasted this starkly with Mrs Underwood, in the US version, taking Frank’s arm possessively. Elizabeth would never. She might raise an amused and fond eyebrow, and that would be all the discussion necessary. Her leash on Francis is indestructible and invisible, and her confidence is bombproof.)

There are strong and conscious shades of Lady Macbeth to her, and that’s a character I’ve always liked a great deal, a woman whose steel and firm grip surpasses the man through whom she has to work. That man is pushed to greater (if more terrible) things than he might have ever achieved alone. And he knows it. That’s part of the leash; Francis wouldn’t dream of losing Elizabeth, because she makes him everything that is worthy of her. If he doesn’t have her, he is a lesser man.

This becomes even more obvious in the sequels (To Play the King and The Final Cut), as Francis starts to crumble and Elizabeth gets more screentime, every moment displaying the steel skeleton of this immaculate British flower. She changes international policy with an artless womanly aside. She plans without flinching.

And she loves Francis. Perhaps that’s my favourite part of her. This perfect woman loves an imperfect man, and she loves him wholly, ruthlessly and without it being a weakness.

There are tales about birds who push their hatchlings from the nest to teach them to fly.

I have never understood why these stories do not include the hatchlings returning on the wing to attack their parents. Are we to believe that such birds have sufficient language to communicate the dire necessity of this action? Is the moment of flight so transporting as to instantly forgive the machinations that led to its discovery? Or are these animals simply so stupid that they will forget this betrayal? Birdbrain.

Sorcerers have excellent memories. It is one of the required attributes.